It would be inappropriate to characterize The Move as a British Invasion band; they never made a splash in America. They never saw the American charts, and they only briefly saw American soil on an ill-fated mini-tour in 1969 that saw them paying their own way back to England.

Despite their lack of stateside success, The Move managed to score seven top-ten hits in the UK, including a #1 hit with “Blackberry Way.” Their sound recalls and rivals that of their contemporaries The Who and The Kinks. Like both of those canonized groups, The Move had an ace songwriter and a driving rhythm section.

Listening to The Move, it’s difficult to fathom how they never achieved widespread success. Their one UK #1 hit, “Blackberry Way,” wouldn’t sound out of place alongside anything written by Lennon, McCartney, Davies, or Townshend in 1967.


***
The Best of The Move is worth finding because it collects their terrific self-titled debut along with the A and B-sides of their first 8 singles. It’s less a best of than a collection of all their early material. Tracks like “Yellow Rainbow,” “(Here We Go Round) The Lemon Tree,” “Cherry Blossom Clinic,” and “Omnibus” stand out as true English pop-rock gems.

Towards the end of their tenure together, The Move’s sound became more muscular and progressive, as evidenced by the final track on this collection, “Brontosaurus.” Around the time The Move began losing their pop sheen, Jeff Lynne joined the group. The Move’s final lineup of chief songwriter Roy Wood, Keith Moonesque drummer Bev Bevan, and Lynne would become Electric Light Orchestra.

Regardless of your feelings on ELO, if you like The Who, The Kinks, The Small Faces, or the psychedelic leanings of The Beatles or The Rolling Stones, you should check out The Move or try to find The Best of The Move.

It’s recently come to my attention that Lexington, Kentucky’s sultans of shred DeAnimator are no more. Count this as a formal letter requesting they reunite.

Please don’t let your debut release—last year’s transcendent Heavy Metal Hara-Kiri—stand as the only document of your unique fusion of death, thrash, and grind.

I don’t want to live in a DeAnimatorless world.

Where else will I find a band who releases their debut album on a green compact cassette with artwork that depicts a skeleton samurai impaled by a Flying V guitar?

Where else will I find a band who plays songs with titles like “Unmerciful Buddha,” “Slaughter at the Festival of the Fire,” “White Heaven in Hell,” and “Anvil of the Void”?

I haven’t even mentioned my favorite DeAnimator song title yet:

“Knee Deep in the Shred”

That’s a song title and a half right there. It’s probably my all-time favorite song title. I need more where that came from.

The thing I love about you guys is your ability to effortlessly blend the detuned guitars of death and the breakneck tempos of thrash with hardcore punk sensibilities. The “epic” track on Heavy Metal Hara-Kiri is three minutes and four seconds long. Each of the other seven tracks is under two minutes in length. The title track goes by in 1:17. Blink and you miss it. However, the hardcore allusions don’t end with the minute-and-change-long songs. Take a listen to the way Jack Hogg—stage name: Frostmourne Hogghammer—sings the chorus of “White Heaven in Hell.” It sounds like he’s calling from the second side of a Black Flag record in 1985.

Speaking of Hogg, he and Teige O’Brien—stage name: Attila Stonehenge—provide axework so intense that it should come with a warning. Check out the solo that comes in just after the one-minute mark on “Unmerciful Buddha.” And hear the entire panoply of guitars on “Knee Deep in the Shred.” The six-string slinging is so visceral throughout that it almost seems to jump off the speakers and smother the listener like a thick cloud of marijuana smoke hanging in the air of a dingy attic apartment. (The simile seems appropriate given the presumably intentional visual rhetorical choice of releasing a green cassette.) 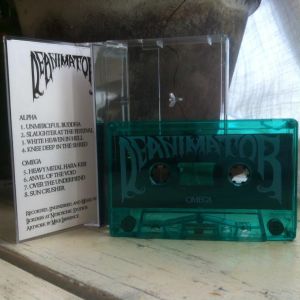 The rhythm section of Josh Routt—stage name: Lord Viking—and Adrian Dickerson—stage name: Thunderous Blasphemous—keep things moving along at a clip befitting the songs’ brief runtimes. Wunderkind Dickerson provides, on nearly every song, blast beats that challenge the listener to hang on tight. On the title track and “Anvil of the Void” in particular, the drums feel like a cathartic death pummel. It hurts so good.

Look, the only subgenres of metal I listen to with any sort of regularity are drone metal and—god, I hate this genre name—stoner metal. I love Earth. I love Sleep. I love Jim Jarmusch’s band SQÜRL. That’s about it. I don’t listen to any other metal with enough frequency to know if what’s happening on DeAnimator’s debut is original. Maybe there are a lot of bands putting out records like this. But to me, it feels incredibly refreshing and unique. And more importantly, it sounds like something of which I want to hear more.

So, DeAnimator, for the love of all that is gnarly and shredworthy, get it together. Come back. The world needs you. Lexington needs you. I need you.

PS: Check out DeAnimator’s debut below or find it on compact cassette at CD Central: