It looks like there is a family feud playing out on the David Mayfield Parade Facebook page.

For those of you who don’t know, David Mayfield is a talented singer/songwriter/multi-instrumentalist and the funniest performer I’ve ever seen in concert. In addition to recording and performing his own songs with his band The David Mayfield Parade, Mayfield has toured with The Avett Brothers.

Here is a video of Mayfield performing the jaunty “What Do You Call It.”

Mayfield’s sister, Jessica Lea Mayfield, is even more accomplished, having released 3 critically acclaimed albums, 2 of which were produced by Dan Auerbach of The Black Keys. I just named her most recent album, Make My Head Sing…, my third favorite album of 2014.

I’ve seen David and Jessica perform together, as part of the sibling rivalry tour, and individually. They’re both great. I’m a big fan of the Mayfield family. Unfortunately, for the time being, the Mayfields will not be performing together. Here is a screenshot of Mr. Mayfield’s initial post and his father’s response: 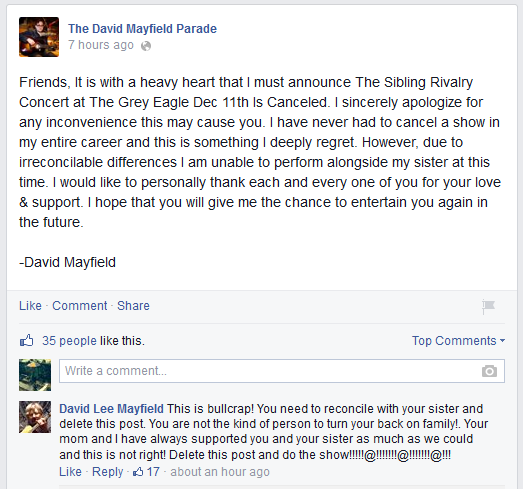 And here is Jessica’s retort: