With production credits on four excellent releases (Jenny Lewis’s The Voyager and his own 1984, Ryan Adams, and Jacksonville) and the unveiling of a new, heavy-hitting touring band known as The Shining, Ryan Adams is having a hell of a 2014. Between the 2009 announcement that he was officially retiring from music and the 2011 news that he suffers from Ménière’s disease, some longtime fans had counted Adams out. Luckily for all of us, counting out such a prolific artist is never smart money. With Adams’s name popping up so frequently in the music rags of late, I’d like to revisit one of the true rarities from his 21-year career: 2007’s The Avatar Sessions.

Sadly, The Avatar Sessions has never been given a proper release. In fact, The Avatar Sessions is just how I refer to the tracks. I’ve also seen them labeled as Easy Tiger – Live at Avatar Studios and Curtain of Lights. The origins of the recordings—consisting of all but one of the tracks from Easy Tiger (thankfully, “Halloweenhead” is nowhere to be found) plus “Magnolia Mountain” and “Beautiful Sorta” from Cold Roses—are somewhat unknown. What I do know is the tracks were recorded live at Avatar Studios in New York City with Adams’s former, and transcendent, backing band The Cardinals. These sessions were also filmed. For this purpose, the studio was decorated with curtains of lights and dozens of lit candles (fire hazard much, Ryan?), which gives the videos an atmospheric tone. I suppose these videos were intended to promote 2007’s Easy Tiger. Frankly, I find the songs work better as their own unique album than as commercials for a record. 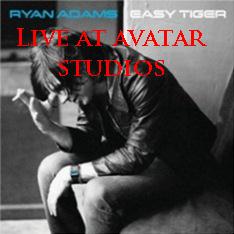 If I do accept The Avatar Sessions as a proper album, I place it as Adams’s third best, behind only 2000’s Heartbreaker and 2005’s Cold Roses. And if I’m being 100% honest, on most days, I consider it the apex of his entire career. Why? Because it features so many of the things that excite me about music: exceptional songcraft, soaring, CSN-style harmonies, rich guitar tones, late-‘60s/early-‘70s-style guitar interplay, a tight, driving rhythm section, postpunk freakouts, and a pedal steel guitar. It’s as though Adams and his Cardinal colleagues tossed a bunch of seemingly disparate ingredients into a pot, and somehow, the resultant stew was wholly original and delicious.

2007 found Adams freshly sober—if you’ve heard him talking about marijuana recently, it’s only being used medicinally as a treatment for Ménière’s (and if a side effect of the medicine is crunchier jams, who are we to judge?)—and bidding adieu to his feminine, drug-addled alter ego Rose. (Side note: understanding Rose, a recurring character throughout Adams’s discography, as representative of Adams himself makes for a much darker read of Cold Roses, which Adams reportedly recorded under the influence of speedballs.) To those ends, it’s fitting that The Avatar Sessions begins with “Goodnight Rose,” a song in 6/8 with a beautiful melody, guitars that alternately chug and chime, and a postpunk outro that would make Hüsker Dü proud. From there, the collection finds “Everybody Knows” fully highlighting the sublime, and now famous, Ryan Adams-Neal Casal guitar interplay and vocal harmonies.

However, if The Avatar Sessions has one “holy fuck”-moment, it’s surely “These Girls,” a sub-three-minute, acoustic ditty on Easy Tiger, but here a nearly-nine-minute ball of reverbed, postpunk fury. Guitars feed back and drums crash for nearly six minutes before the whole song launches into outer space as Adams repeatedly croons “these girls are better off in my head.” If “These Girls” was meant to function as a mantra, it worked; Adams abandoned the girls who fucked him up, screwed his friends, and stole his records (the holy trinity of incorrigible behavior from a romantic partner as documented on “Come Pick Me Up”), and married Mandy Moore right here in Savannah, Georgia in 2009. Fans of 1984, the punk EP Adams released earlier this year, need to find The Avatar Sessions if for no other reason than “These Girls.”

For all its punk rock swagger, this collection also features quieter, more delicate moments. For example, “Oh My God, Whatever, Etc.” catches Ryan and The Cards plucking out pretty, arpeggiated guitar lines underneath one of the session’s more memorable melodies. Elsewhere, the lovely “I Taught Myself to Grow Old” features lonesome harmonica moans amidst rather fetching backing vocals from Casal and Chris “Spacewolf” Feinstein (RIP) and some of Jon Graboff’s nicest pedal steel work on the entire album.

I first found The Avatar Sessions on some digital hole-in-the-wall back in 2007. Seven years later, the album—or the bootleg or however you choose to refer to it—still holds up as one of my favorite moments of Adams’s entire, illustrious recording history. If you’re a fan of well-written songs, gonzo guitars, and a well-oiled-machine of a band kicking ass live, you absolutely have to find this record.